Humpbacks in the Wind 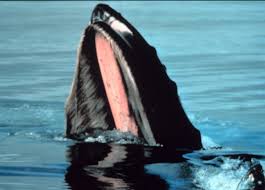 Check out the whale’s baleen on either side of her pink tongue.

When we got to the beach on Wednesday, the wind was blowing but we knew we could take Seasmoke out safely, so we boarded some folks and headed out on a Wake Up with the Whales Cruise. Despite the wind, we saw spouts, dorsal fins and even a few flukes from 5 different Humpbacks. We weren’t entirely sure if one of them was a calf (whoever it was created a small spout, but it dissipated too quickly for us to positively identify the age of the whale). When we looked out on the horizon, we saw some other excited whales breaching in the wind.
The first whale we saw during our Pau Hana Sunset Cruise was to the south of the bay. We went over to investigate, but after seeing him spout a few times, the trade winds blew us right past him, and actually, that was ok, because we saw some more splashing further to our south. As we got closer to this commotion, we realized we were looking at a competitive pod of 3 whales. We saw lots of peduncle throws from them, and lots of weird swirly kind of waves as they twisted and turned at the surface. Eventually we had to turn the boat around to begin the cruise back to the bay, but apparently the whales had the same idea because shortly after we turned, they surfaced just about 25 yards off our bow (causing us to make some interesting maneuvers to stay away from them). The trio surfaced again behind us, and we kept an eye on them as they kept up their competition. Those of us who were looking off the port rails, got to see a breach about 200 yards away (but a lot of us missed that one). Just as we reached the bay, we saw a calf on the surface. Unfortunately for us, by that time it was getting dark, so we couldn’t wait around to see Mom.
Mahalo,
Claire
Ocean Sports Whale Fact of the Day: You probably already know this, but Humpback Whales don’t have teeth — what you might not know is what they have instead. Humpbacks have somewhere between 270 – 400 pairs of baleen plates hanging from the top palate of their mouths. These plates range in length from a foot to about 3 feet long. Where the baleen is attached to the palate, it feels like a horse’s hoof — but it fringes out to form dense mats allowing the whale to “strain the soup of the ocean” when feeding.