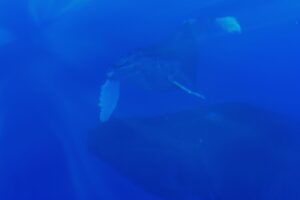 We saw so much on our Tuesday Whale Watch Cruises that I don’t even know where to begin!
Highlights from our Wake Up with the Whales Cruise include watching a lone Humpback following a pod of Spinner Dolphins for awhile. Throughout the course of this cruise we must have seen at least 10 different Humpbacks – they were everywhere –  including one who did a half-breach while we were on our way back to the harbor.
Our Mid-Morning Whale Watch Cruise began with sightings of Mom Humpback and her calf. Shortly after we saw them, a third whale spouted (based on location, we knew he was their escort). As we watched, Mom, baby and escort swam towards us, and then under us (we could clearly see that beautiful turquoise glow from the reflection of the sun off their white pec flippers). While watching these three, all of a sudden, a 4th whale did a huge peduncle throw half way between our first escort and Mom and calf. For awhile, we thought our primary escort chased this second guy away, but then they all came up to the surface, and those escorts were blowing bubbles (why is that interesting to us? See today’s Fact of the Day below). All these whales surfaced several times very close to the boat, and at one point we were totally amazed by how close Mom, Baby and the Escort were to each other. Since the whales were so close to us, we couldn’t move the boat, and we took the opportunity to deploy our hydrophone. Some of what we heard was so loud that we actually had to turn the volume down so we wouldn’t blow out our speakers!
Mahalo,
Claire
Ocean Sports Whale Fact of the Day: What’s the big deal about competitive Humpbacks blowing bubbles? First, let’s look at the “why”. Some researchers think that in a competitive pod, the male whale closest to the female may blow a wall of bubbles to create a screen blocking the view of her from other pursuing males – so it may be one of the many reproductive strategies in the male Humpback’s arsenal.
But perhaps what’s even more interesting about Humpback bubble blowing is the “how”. We know a Humpback can blow lines of bubbles from his blowholes and even his anus. But the observed “walls” of bubbles seem to be coming from the whales’ mouths. We also know that a toothed whale can’t dislodge his epiglottis (so he can’t breathe in or out through his mouth like we can — and this adaptation might have evolved to prevent accidental drownings through aspirated water). But a baleen whale, including our Humpback, has the ability to move his epiglottis slightly, allowing air to pass from the lungs to the mouth. This means that Humpback could drown accidentally…but it also suggests that blowing bubbles through his mouth is a risk he’s willing to take.