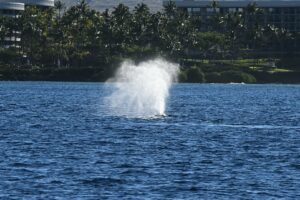 It was a very wet weekend on the Big Island. So wet, in fact that we cancelled all of our cruises on Saturday and rescheduled as many people as were able to join us on cruises beginning on Sunday.
Sunday’s Wake Up with the Whales Cruise departed in a drizzle, but we saw a break in the rain and headed north to cruise under drier skies.
Of course we’re positive that the Humpbacks don’t care about the rain (they’re wet anyway), but ‘lo and behold, we did find a lone whale close to shore in the area out of the rain. This whale was pretty relaxed, surfacing every 16 minutes or so. Apparently all that time he spent underwater caused him to feel out of breath, because when he did come to the surface we saw him spout not once, not twice, and not even the usual three times before sounding – we got to see him spout 6 times as he re-oxygenated for another 16 minute dive!
Mahalo,
Claire
Ocean Sports Whale Fact of the Day: Though you probably know by now that Humpbacks don’t have teeth to help break down their food, have you ever stopped to think how they can so efficiently digest the thousand pounds of food they eat daily in Alaska? It all has to do with their compartmentalized 3 – part stomachs. The first part, called the “forestomach” or “rumen” uses strong muscular contractions to begin to break the food down. The food then moves into the “cardiac stomach” where acids and enzymes are produced to further liquefy it. The partially digested food then moves through a narrow tube into the “pylorus” where mucus is added to help the food slide through the intestines. Since cetaceans don’t have gall bladders, their huge livers supply the bile they need for lipid (fat) digestion, and their very long intestines (up to 5 times the length of their bodies) allow for adequate nutrient absorption.