Something Rare and Someone Familiar 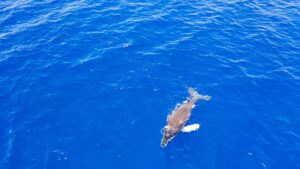 Friday’s Wake Up with the Whales Cruise began with an unusual sighting of 3 Rough-Toothed  Dolphins. Unlike the Spinner Dolphins that we see more commonly, these dolphins didn’t show any interest in playing in our bow or stern wakes. We first saw them at our 12:00 about 50 yards away, and then saw them at our 3:00 fairly close to the boat.
The next cetaceans we spotted were a Mom/Calf duo. It’s possible that they were the same two whales we’ve been watching all week — Captain Kino thought he spotted those tell-tale white pectoral flippers, but our head naturalist Greg wasn’t sure he saw the same thing. Regardless, Mom and calf were on the surface quite a bit. Of course after seeing those dolphins, our calf didn’t look quite so small (it’s all relative), but his spouts were like little puffs compared to Mom’s.
We got the opportunity to deploy the hydrophone twice during this cruise, and both times, the sounds we heard were much louder, much clearer, and much more varied that what we heard on Thursday. When we weren’t watching rare (for us) dolphins or our Mom and calf, we spotted spouts from other lone Humpbacks in various directions further away from us.
Mahalo,
Claire
Ocean Sports Whale Fact of the Day:  When we say we heard LOUD singing, just how loud do we mean? Well, Humpback whales have been recorded producing sounds at around 185 decibels. Because the decibel scales use different references for sounds underwater than through the air, that’s the equivalent of about 123 decibels for us on the surface…which is as loud as the amplified music at a rock concert when you’re standing directly in front of a tower of speakers.