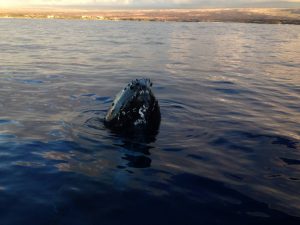 Check out those barnacles!

We had a wonderful morning at sea on Thursday’s Wake Up with the Whales Cruise. We started the trip surrounded by a pod of about 60 Spinner Dolphins. As was typical for the Spinners, as soon as they heard our boat they came over to investigate and play with the wake. While they were jumping and spinning and splashing all around us, we saw a Humpback spout at our 8:00 not too far away, followed by another set of spouts at our 9:00 a bit further.
After the Spinners tired of us, we went to investigate our 9:00 duo…and then we saw a pod of 3 Humpbacks who seemed to be following our pod of two. As we watched, this ‘parade’ of whales began to pick up speed and eventually we couldn’t keep up and had to abandon them. But right after that a lone Humpback decided to breach to our north, and after seeing him breach again, we decided to head over to check him out. We watched him breach a third time, but by the time we got to our 100 yard mark he had tired himself out. He must have been out of breath, because while we watched, he surfaced, spouted, and sounded every minute or so. And even though he obviously wasn’t diving very deeply, we did get to see his flukes a couple of times.
While we were on our morning cruise, a series of big earthquakes near New Zealand triggered a tsunami watch for all of Hawaii, with the first waves (if they occurred) forecast to reach us around 4:30 PM. Luckily, by noon the Pacific Tsunami Warning Center (the agency monitoring the wave gauges between New Zealand and here) called off the watch, so we were able to take some folks out on a Private Sunset Cruise.
As we headed south out of the bay on this trip, we saw spouts here and there, but eventually came across a Mom/Calf/Escort trio, who were hanging out very close to another Mom/Calf/Escort trio. And also in the same general area we saw, you guessed it, a THIRD Mom/Calf/Escort trio. All of these adult whales were big, and even the calves seemed big to us. Of course the perception of the calves’ sizes could have been affected by how close they came to us – several times two of those calves surfaced within 30 feet of the boat. We were able to distinguish between the Moms and their calves because one of the Mom/Baby pairs had completely white pectoral flippers. After watching these 9 whales for awhile, we hoisted the sails and sailed further south. Eventually, we had to come about, and on our way back to the bay, we encountered our white-flippered friends another time.
Mahalo,
Claire
Ocean Sports Whale Fact of the Day: The barnacles called “Coronula diadema” live only on Humpback Whales, and they seem to prefer to live on areas of the whale where the water flow is consistent (chin and fins). Though researchers aren’t sure how the barnacle can even find a whale to live on, there is some speculation that because the barnacles are spawning during the winter in Hawaii, the whales here are swimming in “barnacle larvae soup”. When a whale swims by, those “baby” barnacles chemically sense it, and hop on where ever they can. They use their antennae as “feet’ and walk around the whale till they find a suitable spot which can take quite a while… (if the barnacle were the size of a person, the whale would be 20 miles long). Once they find a spot they like, they flip over and produce tube-shaped cavities in their shells that actually draw in prongs of growing whale skin, holding their position on the whale for life. Enlarge the image above to see some of those barnacles riding on a Humpback’s rostrum.