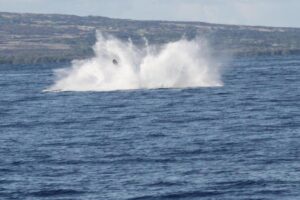 Guests on our Private Snorkel Cruise on Thursday spent the first part of the cruise watching a lone whale. This whale originally caught our attention by breaching, but we only saw that one time– the rest of the time, we watched him surface and spout. He was very distinctive looking as he was very lightly colored (not white, but certainly a light gray). He also had a distinctive dorsal fin with kind of a notch in it — unfortunately, we didn’t get a good picture of that. After we decided to leave this whale to get to our snorkel site, we found ourselves surrounded by a pod of inquisitive and active Spinner Dolphins. They played with the boat for awhile, but we finally had to leave them behind as it was OUR turn to get into the water.
Mahalo,
Claire
Ocean Sports Whale Fact of the Day: Humpbacks can maintain a consistent body temperature even when swimming in cold Alaskan waters. How do they do that? Besides their protective layer of blubber, they actually have something called a “counter current” circulatory system. Some arteries in their flippers, flukes, and dorsal fin are surrounded by veins, allowing some heat from the blood traveling through the arteries to be transferred to the venous blood returning to their hearts, instead of being lost to the environment.