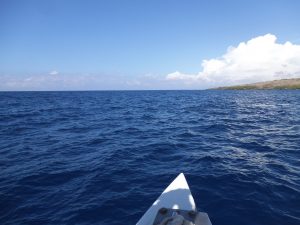 Guests on Friday’s Wake Up with the Whales Cruise were met and escorted just outside of the harbor by a pod of about 40 Spinner Dolphins. After cruising south with them for awhile, we stopped the boat to deploy the hydrophone. We heard a few whales singing (which boded well for future sightings). Later in the cruise we found a lone Humpback on the surface. Our first sighting was of his spout from quite a distance. This whale was on 9 minute dives, so as we approached, we saw him a few times. Once we got to that 100 yard mark, we stopped the boat and waited. Our last sighting of this whale completely surprised us as he chose to surface just 25 yards away!
Mahalo,
Claire
Ocean Sports Whale Fact of the Day: Not all whaling activity occurred during the “golden age of whaling” at the beginning of the 19th century. Based on catch records corrected for illegal Soviet whaling, a total of more than 200,000 Humpback Whales were killed in the Southern Hemisphere from 1904 to 1980. Also, Illegal Soviet takes of 25,000 Humpback Whales in two seasons (1959/60 and 1960/61) precipitated a population crash and the closure of land stations in Australia and New Zealand.