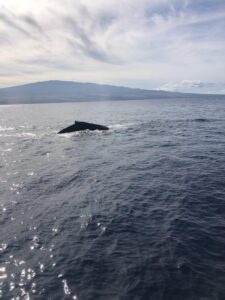 Aloha,
We saw more whales during Wednesday’s Wake Up with the Whales Cruise than we have seen during any single cruise yet this season.
If we count from the very beginning of the trip to the very end, we know for sure that we saw 10 different Humpbacks, but we spent most of our time watching 4 “medium” size Humpbacks who were apparently watching us too.
These 4 spent a considerable amount of time on the surface within that magic 100 yard distance (I say “magic” because we always stop at least 100 yards away from any of the whales we see, and when they choose to approach us, it really is a magical experience).
The four-some didn’t seem to be in any particular hurry to go anywhere, and they also didn’t appear to be in any sort of competition with each other. We all got lots of great views of their dorsal fins and flukes since they spent so much time on the surface. When we lowered our hydrophone we heard all sorts of interesting “new” sounds (for more on this, see today’s Fact of the Day).
Mahalo,
Claire

Ocean Sports Whale Fact of the Day: To our untrained ears, the sounds we hear from our hydrophones sound pretty random, though we have noticed the lack of certain phrases this year that we heard fairly often last year. According to a paper published in the journal Current Biology, it turns out that our ears aren’t so untrained after all. Researchers have documented that the Humpback songs in the South Pacific are actually changing really quickly. Over the last decade, completely new song themes are appearing within a season. The researchers compared the radical evolution of the Humpbacks’ songs to human musical composition, suggesting that the themes are so novel; it’s as if whole new human musical genres were appearing that no one had ever heard just a few years ago.
Haven’t ever heard a Humpback sing? We can fix that! Click here!