We Know They’re Out There 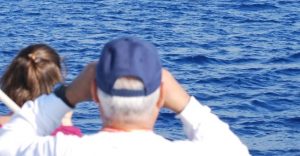 We only got to see one Humpback during Thursday’s Mid-Morning Whale Watch Cruise from Kawaihae Harbor. We watched him spout 4 times before he disappeared under the surface of the water.

And when I say “disappeared”, I mean “disappeared”…because we waited and waited and waited for our whale to surface again. While we were waiting, we deployed our hydrophone — and unlike yesterday’s experience, this time we got to hear a couple of different whale’s voices (one was very loud so we knew he was close by).

Eventually we realized that our breath-holding whale had somehow outsmarted us, surfacing somewhere around us where we weren’t looking (Humpbacks can hold their breath a lonnnngggg time…but not for as long as we waited), and we had to head back to the harbor.

So, though we actually did see one Humpback and got to listen to several more, it wasn’t good enough for us. We called the trip a “Fluke” and invited everyone who was aboard to join us again on another Whale Watch cruise for FREE!

Ocean Sports Whale Fact of the Day: Yesterday I promised I’d outline the rules regulating human to Humpback interaction. In 1966, the International Whaling Commission banned most nations from hunting Humpbacks. In the U.S., the Marine Mammal Protection Act of 1972, and the Endangered Species Act of 1973 provide additional protection to the whales. And though the Humpbacks are now no longer “officially endangered”, unless you’re operating under a federal research permit, approaching humpback whales within 100 yards (300 feet) by any means (boat, swimming, kayaking etc) or within 1,000 feet from aircraft is still prohibited. It’s also prohibited to approach the whales closer than 100 yards by interception (i.e. you can’t “hop-scotch” in front of them), or do anything that would disrupt their “normal behavior” or “prior activity”.