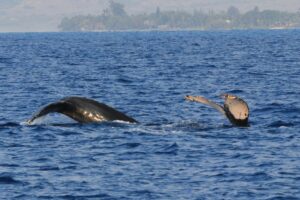 The chase is on…image courtesy of Bob from Tennessee

Over the years, I know I’ve mentioned that you don’t have to be on a dedicated Whale Watch Cruise to have a great experience with the Humpbacks, and the guests on Tuesday’s Private Sail on Manu Iwa would definitely agree with me!
The weather was great…the water was crystal clear, and a pod of 4 big Humpbacks (they were almost as long as the boat — and Manu Iwa is 50′ long) spent over an hour with us. These 4 surfaced over and over and over again just about 50 feet from us (of course, we weren’t moving at all — they came to us). It seemed as if one of them (presumably a female) was actually using us to try to shake the other 3 (presumably males), as she kept turning back and diving under us with the other 3 in hot pursuit. They were all swimming hard, so every time they surfaced they spouted heavily, and we got to hear a lot of trumpeting from these out-of-breath Humpbacks. We also got to see some “headstands” when the whales lifted their flukes into the air, and got to see lots of twists and tight turns as these whales interacted with each other. Since we weren’t moving, we deployed the hydrophone and got to listen to the whales rush by the microphone. UN-BE-LIEV-ABLE!!!
Of course we get to see a lot of Humpbacks during our Guaranteed Whale Watch Cruises too. Case in point: guests on our Mid-Morning Whale Watch Cruise on Seasmoke got glimpses of 9 different Humpbacks throughout the course of the cruise. Most of the time was spent watching the same competitive pod that the guests on the private Manu Iwa cruise were watching. The whales were closer to Manu Iwa than they were to Seasmoke, but everyone on both boats got to see those “headstands” and everyone on both boats got to hear the whales trumpeting as they struggled to catch their breath. Seasmoke’s hydrophone didn’t pick up the sounds of the competitive pod, but there were some whales much further away who were vocalizing, and their voices, though faint, were recognizable.

Ocean Sports Whale Fact of the Day: When a Humpback spouts, he’s exhaling in a half of a second, 90% of the volume of air in his lungs. It’s enough air in one blow to fill up the interior of a stretch limousine. In case you’re curious, when an average size human adult exhales, he takes 3 times as long to exhale just 15% of the volume of air in his lungs — and an adult human exhalation wouldn’t even fill up a Smart Car — it’s only enough air to fill up a lunch bag.