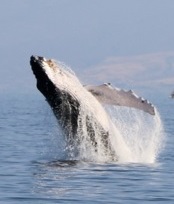 In the words of our on-board naturalist Captain Maika, “Tuesday’s Whale Watch Cruise was FAN-TAS-TIC”!

What made this cruise so fantastic was the pod of 2 Humpbacks who decided to investigate our boat. These two swam under and around us with very short bottom times, so we got to see them often. One of the two had very distinctive white pectoral flippers (which literally “glowed” when the whale passed by us under the surface) and his buddy had the typical counter shading we’re used to seeing. At one point, they surfaced maybe 15 feet from us.
But it wasn’t just that close encounter that made the trip so incredible — our two inquisitive Humpbacks also decided to breach 6 different times while we watched them. Fantastic!
Mahalo,

Ocean Sports Whale Fact of the Day:  Just how difficult is it for a 40 ton, 45 foot long animal to “fly” from the sea in a total breach? Observers have reported seeing Humpbacks breach after only two kick strokes for propulsion. Based on the formula for calculating horsepower, measurements of laminar flow around cetacean skin (how water flows past the skin of the animal), girth and drag in the water, the breaching whale is producing between 1500 and 1700 horsepower in order to “catch air”. We used to think it was closer to 5000 horsepower, but with the aid of a calculator and more accurate measurements, we’ve been able to recalculate …still, try this yourself next time you’re in the water. We’re betting you won’t get very far!