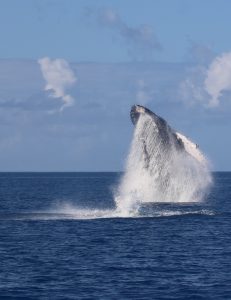 Aloha,
We weren’t even out of the bay yet on our Wednesday Wake Up with the Whales Cruise when we saw our first breach to the north.
Figuring that this boded well, we took a right hand turn and headed towards the Hilton. And then…nothing happened. And then… more nothing.
After about 30 minutes of waiting around, looking for more splashes or even a spout, we had collectively given up.
But the Humpbacks had a surprise in store for us, and seemingly out of nowhere, about 100 yards in front of us, two huge Humpbacks breached at the same time. And then while we watched, these 2 kept breaching over and over and over again.
All that commotion not only got our attention, but it got the attention of another Humpback. We got to see this third whale approach our breachers. Apparently he didn’t like what he was seeing (or maybe he was intimidated) because instead of joining the duo, he just cruised right past them. His presence (and subsequent absence) didn’t appear to affect the behavior of our two whales as after he passed, they kept right on breaching, tail lobbing and even pectoral slapping.
While we were watching all this craziness, we deployed our hydrophone and not only got to listen to some other whales in the near-by vicinity singing, but got to hear the sounds made by our duo as they slapped the water with their various appendages and landed after their breaches.
Mahalo,
Claire

Ocean Sports Whale Fact of the Day: One of the questions we get asked most frequently on whale watches (and it certainly came up today), is “Why are the whales doing that?” (and for “that”, you can substitute any whale behavior we see…breaches, head lunges, peduncle throws…etc). Since we really can’t ask the whales (well, we can ask, but they aren’t answering) we tend to interpret behavior based on what else is going on in the whales’ lives at that particular time. Humpbacks are in Hawaii to mate, calve, and take care of their babies. Aerial behaviors often result in big splashes which may be a great way for a whale to communicate size, status, location, excitement, aggression, irritation, or health to other whales (or to something/someone else he hears on the surface).