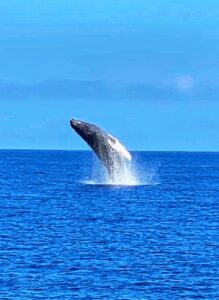 Ok, so I know that yesterday I mentioned I wouldn’t be filing any Whale Reports again until next week…but Wednesday’s Private Whale Watch Cruise on Alala was just too exciting that I couldn’t NOT share it with you

The weather was just perfect, and throughout the course of the cruise we saw at least 25 different Humpbacks on the surface.

Most of the pods we saw were made up of Humpback duos, but we did see a few loner sub-adults here and there. What made the trip so incredible though was when we encountered a competitive pod. At first there were 6 big whales in the pod, but 3 of them peeled off rather quickly.

The 3 remaining whales breached a couple of times right next to our boat (see today’s image). We also saw several head lunges as these whales asserted their dominance, and one of them tail lobbed at least 20 times just about 200 yards from us.

If you’ve ever been in the midst of this kind of action, you’ll understand what I mean when I say that it took a good 30 minutes for our blood pressure to return to normal after that display!

Ocean Sports Whale Fact of the Day: A Humpback Whale doesn’t reach sexual maturity till it’s about 35 feet long (age 5 or 6 for females, and a little bit later for males). Researchers have observed that most Humpbacks in the North Pacific don’t begin calving successfully till they’re at least 10 years old – the mean average is 11.8 years. In the North Atlantic, Humpbacks generally give birth for the first time between ages 5 and 7, reaching sexual maturity earlier too.