How Far Would you Travel for Love? 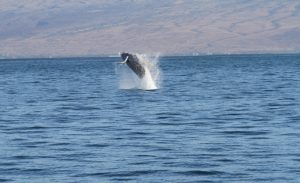 We operated back-to-back Whale Watch Cruises from Kawaihae on Thursday.
Though we saw a lot of spouts from whales pretty much everywhere we looked, the highlight of our Mid-Morning Cruise was getting to watch our favorite trio of Mom, her baby, and their escort. When we first spotted them, the baby was pretty calm, just surfacing, spouting, and diving down to his mom. Later in the cruise he decided to burn some baby-energy and breached 5 times in a row just about 100 yards from us. After that, he decided that we might be worth checking out, and he made a B-Line straight towards us. Momma wasn’t having it though, and we got to watch her cut him off, and literally push him away from us.
Our Afternoon Whale Watch Cruise began with sightings of Mom and baby too…and once again we got to see a few breaches from the baby. After watching the little guy exhaust himself, we saw a big spout a bit further down the coast, so we went to investigate. This whale was by himself and we were really surprised when he breached a few times. After this whale stopped breaching, we looked around and saw…nothing (this is the part of whale watching that no one ever really talks about…staring really hard at nothing, waiting for something to happen).
On the way back to the harbor we got to watch a sub-adult Humpback do a couple of huge peduncle throws followed by several pec slaps (probably directed towards the whale that seemed to be cruising with him). And our day ended with a pod of very curious Spinner Dolphins who swam up to us and played in our wake, spinning, tail-lobbing and leaping.

Ocean Sports Whale Fact of the Day: This just in! A couple of male Humpbacks have been spotted at TWO mating grounds within the same mating season. Based on the distinctive markings on the Humpbacks’ flukes, researchers were able to determine that these male Humpbacks traveled from their feeding grounds in Alaska, down to breeding grounds in Mexico…and then swam another 3000 miles to the breeding grounds in Hawaii all in the same season.This observation, combined with observations of “song-sharing” between Humpbacks offshore of Mexico and Humpbacks offshore of Hawaii during the winter season, as well as recordings of Humpback songs coming from the area midway between the two breeding grounds suggest that the “Mexican” population of Humpbacks and the “Hawaiian” population of Humpbacks are not distinct populations.
So why does this matter? Back in 2016, researchers removed our “Hawaiian” Humpbacks from the Endangered Species list, determining that the Hawaiian population is no longer at risk. The Mexican population, on the other hand, was still listed as “threatened”, and thus was granted more protection. If all the Humpbacks are really part of the same population as this recent research suggests, then we really need to reconsider the management strategies impacting all Humpbacks — not just the human-designated separate populations.
Perhaps more importantly (or maybe, less importantly), it also means that Humpbacks are willing to travel 6000 miles in search of a mate…and that they swim a lot faster for a lot longer than we had given them credit for being able to do!