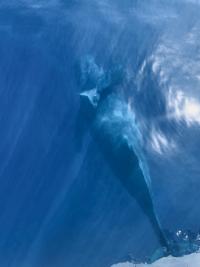 Whales Swim under the Boat

We got to see at least 14 — maybe 16 different Humpbacks during Thursday’s Mid-Morning Whale Watch Cruise. Our first sightings were of a pod of two who surfaced and spouted way to our south, so we took a left hand turn out of the harbor and headed that way. Of course by the time we got to them, they were underwater, and since we weren’t seeing any other action on the surface anywhere, we took a moment to lower our hydrophone. We got to listen to some very loud whale voices (how loud? see today’s Fact of the Day for more on that).

After listening for about 15 minutes, we saw a pod of 4 sub-adults who surfaced about 100 yards south of us. These 4 weren’t really competing, but they were clearly cruising around together, and based on the width of their flukes, were clearly not yet mature adults. After paralleling them for awhile (at one point they veered over to check us out from about 50 yards away), we saw the tell-tale spout of a calf a bit further to our south. We turned the boat and headed over to see if Momma would surface before we had to go back to the harbor. This turned out to be a great decision, because not only did Momma surface, but an Escort surfaced too. These 3 were very interested in the boat, surfacing several times right along side of us — we also got several glimpses of the escort as he cruised around about 30 below the boat. When the calf surfaced close by, we noticed he had a little injury near his blowhole. It didn’t seem to be affecting his behavior, but we’ll be on the look-out for him the next few days.

Ocean Sports Whale Fact of the Day: When we say we heard LOUD singing, just how loud do we mean? Well, Humpback whales have been recorded producing sounds at around 185 decibels. Because the decibel scales use different references for sounds underwater than through the air, that’s the equivalent of about 123 decibels for us on the surface…which is as loud as the amplified music at a rock concert when you’re standing directly in front of a tower of speakers.