Not Every Sound we Hear is a Song 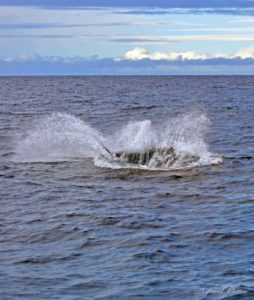 The surf on the west side of the island was coming up fast during Friday’s Wake up with the Whales Cruise. It doesn’t really affect us that much when we’re far from shore, but we definitely could feel the slow rolling swell as the water moved beneath us.

The whales probably could feel it too, but it didn’t seem to really affect them very much either. We got to see about a dozen different Humpbacks during the cruise. Six of these whales were spouting in various directions about 300 yards from us.

We couldn’t decide if the favorite part of our cruise was getting to see 3 breaches just about 150 yards away…or getting to see a Mom/Baby/Escort pod surface, spout and dive several times just about 50 yards from us…or listening to some incredible Humpback songs and sounds through our hydrophone.

Just an FYI from me…on Saturday, we begin a very busy week of Exclusive Cruises. I’ll try to post whale sightings updates (as we’ll undoubtedly be spending quite a bit of time with the Humpbacks), but I may not be able to post consistently till the end of the week.

Ocean Sports Whale Fact of the Day: Though we’ve mentioned before that only male Humpback Whales “sing”, all Humpbacks make noises and apparently use these sounds to communicate with each other. Researchers have witnessed cooperative feeding behaviors among the Humpbacks apparently “triggered” by sound, and have also witnessed Humpback Cows (moms) apparently ignoring some sounds made by their calves, but responding immediately when the calves made particular grunting noises accompanied by jaw claps or bubble blowing. So it appears that Mom both recognizes and responds to her baby’s voice! You can read more about non-sound Humpback sounds here.