Playful Calf, a Lob and a Slap 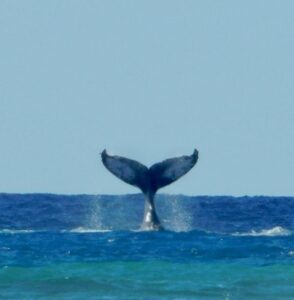 We ran back-to-back Whale Watch Cruises from Kawaihae on Tuesday.

Our first sighting on our first trip was just outside the harbor. After watching this lone whale spout and sound, we found a pod of 3 adults a bit further to our south. This pod didn’t spend too much time with us so after they sounded, we went to investigate a tiny spout — which turned out to be from a little calf accompanied by his Mom (no escort in sight). Those of us scanning the horizon a couple of miles out to sea got to see some breaching too, and on the way back to the harbor we saw more spouts from pods of two Humpbacks who were just surfacing, breathing and diving.

We spent about 20 minutes with a Mom/calf pod on our second cruise of the day. This time we got to watch the calf play a bit. He did multiple little uncoordinated dives down to his Mom, and appeared to enjoy spinning around a bit at the surface. Later in the cruise, a lone Humpback did a single tail lob right in front of the boat, and we saw some pectoral slapping from another lone Humpback a bit further away. We also saw spouts from 7 other Humpbacks all within a couple of miles of the boat.

Ocean Sports Whale Fact of the Day: There’s a time when a whale is still in its fetal stage that it’s covered in fur. By the time the calf is born, the fur has disappeared. Many researchers believe that this is another indication that whales have evolved from an animal with a common ancestor to a hippo. The idea that the stages of an animal’s fetal development reflect evolutionary development or “Ontogeny recapitulates Phylogeny” was first proposed by Ernst Haeckel around 1900.