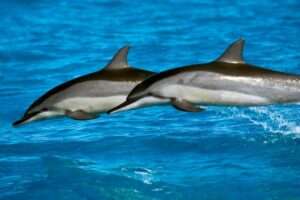 We saw one Humpback twice during Tuesday’s Mid-Morning Whale Watch Cruise. The first time we saw him, he surfaced, spouted once and disappeared. We headed to the area where we thought he had dove…and 30 minutes later we saw another single spout before that whale disappeared again.

Though all of us aboard spent the entire 90 minutes scanning all around us, we never saw another spout or splash from a Humpback. When we deployed our hydrophone, we didn’t hear a single whale voice either. On the way back to the dock, we were surrounded for awhile by a pod of Spinner Dolphins and though that was a lot of fun, and though we did see a Humpback twice, it wasn’t good enough for us. So, we called the trip a “Fluke” and invited everyone aboard to join us again on another Whale Watch Cruise for FREE.
Mahalo,
Claire

Ocean Sports Whale Fact of the Day: Where do the Humpbacks go when they migrate away from Hawaii? Most of them appear to migrate directly north, to feeding grounds off of northern British Columbia and southeastern Alaska waters. But they can migrate to just about any location round the Pacific Rim — at least one humpback satellite-tagged in Hawaii spent the summer in Russian waters.