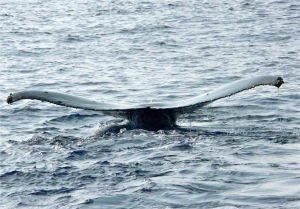 We didn’t operate any cruises on Sunday, but guests on our Saturday Mid-Morning Whale Watch Cruise spent most of the cruise getting to know a Momma Humpback and her calf.

We first noticed these two when we saw their spouts to the south of the harbor. By the time we caught up to the two of them, they were offshore of the Mauna Kea Beach Hotel, swimming north. We kept a respectable (and legal) distance from them but got to see both of them quite often for the first 40 minutes of our encounter. Baby was up and breathing every few minutes, and actually, his Mom surfaced every 6 minutes or so too. We even got to see a glimpse of Mom’s flukes a few times (though she wasn’t diving too deeply).

We estimated that Mom was only about 35 – 40 feet long, so we’re guessing that her calf may have been one of her very first. The two of them continued their slow swim to the north, just surfacing, spouting a few times, and diving, until seemingly out of nowhere, Mom breached! It took us completely by surprise…but luckily, since the two of them had been surfacing so predictably, we were all looking at the right place at the right time to see it — and that was surprising too. More often than not, most of us are looking the WRONG way to catch the entire breach! After Mom’s breach, they continued swimming slowly, but began surfacing less frequently.

When we had a few moments to deploy the hydrophone, we heard some whales’ voices, but the “conversation” was taking place several miles from us (the sounds we picked up were pretty faint).

Ocean Sports Whale Fact of the Day: Before whaling was banned internationally, Humpback whales’ livers were processed for their oil, which contained a lot of vitamin A. A fully grown Humpback has a liver that weighs between 800 and 1400 pounds. An adult human’s liver averages between 3.2 and 3.7 lbs. (which means our livers are proportionally the same size to our overall body weight as theirs are to their body weight).