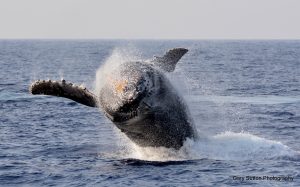 What a difference a day makes! Guests on Monday’s Wake up with the Whales Cruise from Kawaihae Harbor didn’t see a single spout. But oddly, all of the guests on our Monday Morning Private Snorkel Cruises departing from Anaeho’omalu Bay saw so many Humpbacks that we couldn’t keep count.

On Tuesday though, the action began just outside of Kawaihae Harbor. We had hardly left the dock when we saw our first splashes…and it just got better from there. As we approached the whales (keeping more than 100 yards away from them) we were treated to a huge surface display. We saw single breaches, double breaches and even a triple breach from what turned out to be a competitive pod of 4 adult Humpbacks. These whales were moving fast — about 8 knots — and we did our best to parallel them for more than 9 miles. Not only did we see more than 30 breaches, but we got to watch them battle for dominance, pec slapping, shoving each other around at the surface and even landing on top of each other. We’re really not violent people…but getting to witness something like this just takes our breath away.

Ocean Sports Whale Fact of the Day: It is very possible that Humpback Whales did not migrate to Hawaii prior to the “golden age of whaling” in the 1820’s. Not only have we not discovered fossilized remains of Humpbacks on the islands from before that time, we’ve never found petroglyphs of Humpbacks from before the 1820’s either. Also, there’s no word in the Hawaiian language for the Humpback whale (though there is a word for whales in general – Kohola). No commercial whaling occurred in Hawaii, though whalers did re-provision and spend the winters in Hawaii (especially in Lahaina). And…most interesting is the fact that no mention of Humpback whales has been found in the log books of whaling ships anchored off Lahaina – and the whalers were paying attention to the presence of whales, since any whale taken meant MONEY. Perhaps the whaling taking place in the North Japan Sea at that time forced the Humpbacks to find new migratory destinations.