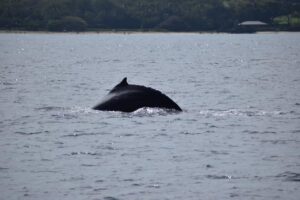 I don’t know if you’ve been following the weather trends in Hawaii the last few days, but if you haven’t, I’ll summarize: STORRMMMMYYY!

After a few days of being rained out, we finally got to take guests out on Seasmoke for our Wake up with the Whales Cruise on Wednesday.

Shortly after departing the bay, we saw some spouting about a mile out to sea. We headed over and quickly realized we were looking at a trio of Humpbacks. Of course we can’t determine gender for sure (unless there’s a calf around, and then the whale closest to the baby is Mom) but we could determine relative age based on size. Two of these whales were about the same size (in the 40′ – 45′ range) and the other was a lot smaller. This littler guy was definitely not a calf, so we spent some time musing on whether we were watching Mom with her yearling accompanied by a male escort — or we were just watching a small group of Humpbacks who had recently found each other and were interacting as Humpbacks are wont to do.

Oh, and at one point while we were just floating and watching, the youngest of those Humpbacks decided to see what all the fuss was about on our boat and veered over for a closer look, coming within 30 yards of us. Since we always stop 100 yards from any Humpbacks we see, we can’t make those close encounters happen, but if a whale wants to check us out, it’s ok with us!

Ocean Sports Whale Fact of the Day: In 1966, the International Whaling Commission banned most nations from hunting Humpbacks. In the U.S., the Marine Mammal Protection Act of 1972, and the Endangered Species Act of 1973 provide additional protection to the whales. And though the Humpbacks are now no longer “officially endangered”, unless you’re operating under a federal research permit, approaching humpback whales within 100 yards (300 feet) by any means (boat, swimming, kayaking etc) or within 1,000 feet from aircraft is still prohibited. It’s also prohibited to approach the whales closer than 100 yards by interception (i.e. you can’t “hop-scotch” in front of them), or do anything that would disrupt their “normal behavior” or “prior activity”.