Breaching and Close Encounters…oh, and dolphins too! 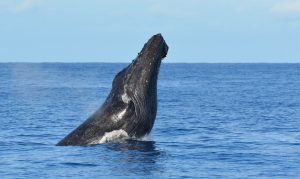 Aloha,
While we were still on the mooring getting ready to cast off on Monday’s Wake up with the Whales Cruise, we saw a competetive group of 4 whales cruising past the mouth of the bay heading north. By the time we got out of the bay, 3 of these whales had already split off and vanished. We were able to see the spout from a lone whale though, so we headed a bit further north to see what we could see. This whale was on the smaller side (maybe 30 feet long) and seemed interested in us, at one point surfacing just 50 yards from our idling boat. When he lifted his huge rostrum (head) we could even see his tubercles (that’s what we call the round bumps on the whale — see today’s Fact of the Day for more on tubercles). While we were waiting around to see what this whale would do, seemingly out of nowhere a pod of about 40 Spinner Dolphins surfaced near us and circled the boat. And if that wasn’t enough to raise our collective blood pressure, two more whales surfaced a bit further out to sea. We spent the next 30 minutes traveling back and forth between our pod of two whales and our loner whale. As we were watching our pod of two, they both breached, followed by something a bit strange. It looked like they were getting ready to breach again as each came vertically out of the water about half way…but instead of launching themselves out of the water, they immediately slipped vertically below the surface again…kind of like a spy hop, but they didn’t stay above the water long enough to really spy on anything!
After we deboarded the folks from our morning Whale Watch Cruise, we reboarded for a Private Snorkel Cruise. Since our main goal on this 2nd trip was to get our guests to a snorkel site, we didn’t have a lot of time to watch whales. We did get to see a couple of Humpbacks breaching towards the end of the cruise, and we also got a very quick glimpse of a pair of cruising Bottlenose Dolphins.
Mahalo,
Claire

Ocean Sports Whale Fact of the Day: All mammals have hair. Humpback Whales are mammals… so where is their hair? Humpbacks have rows of bumps on their chins that we call “tubercles”. Out of each one, sticks a hair that’s about 1/2 inch long that we call a “vibrissa”. Because there’s a nerve ending underneath each hair, and blood flow to the nerve, we know the whales use these hairs to sense something…but we’re not sure what they’re sensing. Quite likely, they use their hairs like cats use their whiskers – for proprioception…or perhaps these hairs work in a coordinated fashion with sensory organs in their chins helping the whales to know when to open and close their mouths around schools of prey.