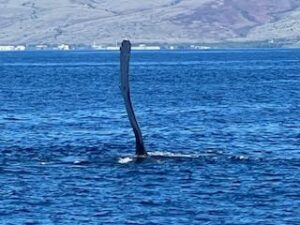 Once again our sightings began before we even got to the mouth of Anaeho’omalu Bay as we saw a huge splash from a breaching whale. Since we were just headed out at that point, pretty much everyone aboard was looking forward which meant that pretty much everyone got to see the breach.

As we approached, we realized we were looking at Momma whale and her tiny, tiny calf. Unlike the two other calves we’ve seen this season, today’s baby was full of energy. We got to watch him breach multiple times in between all his little twisty dives down to his Mom (who was resting below the surface). Baby even did a little head lunging. When an adult Humpback lifts his huge head, lunging forward and landing with a big splash, researchers tend to interpret the behavior as aggressive. But when a Humpback calf does the same thing, it’s just adorable!

We spent much of our cruise watching Momma and her crazy baby, but when we could tear our eyes away from the action, we did see a couple of other big whales spouting further out to sea.

After we returned to the bay, we brought some other folks aboard for a Private Cruise. This time we got to watch a couple of adult Humpbacks for quite awhile. These two showed off their flukes several times — one fluke was almost all white and the other almost all black, so it was very easy to keep track of who was who. We even got to see a few pectoral slaps from one of the pair. Since these two Humpbacks were very close together, we’re assuming that the one doing the slapping was communicating excitement or displeasure (or a little of both) to the other.

Ocean Sports Whale Fact of the Day: Why do we love to see a Humpback wave his pectoral flipper in the air before slapping it on the surface of the water? Well, that pectoral flipper is one of the most distinguishing morphological (body) characteristics of the genus. Humpbacks have extremely long pectoral flippers averaging 1/3rd the length of their bodies (approx. 15 feet). The flipper is such a distinguishing feature that the genus name for the Humpback (Megaptera) actually describes it – the translation from Latin for Megaptera is “Big – Winged”.