Surprised by a Slap 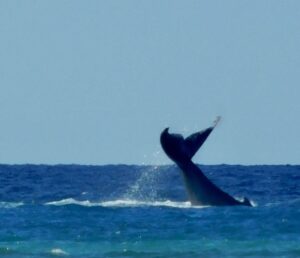 Aloha,
Our little section of the ocean seems to be filling up with Humpbacks. During the course of Tuesday’s Mid-Morning Whale Watch Cruise we saw more solo Humpbacks than we had seen in any single 90 minute period so far this season.
We spent our cruise with 4 different Humpbacks. All of them seemed to be in the surface-spout a couple of times-dive mode. And after each disappeared from the surface, we’d hang around for awhile to see if our Humpback would resurface nearby, but would get distracted by another whale who was choosing to surface in a different direction — so off we went. In between sightings, we took a moment to deploy our hydrophone and heard the best whale sounds we’d heard all season. We could tell we were listening to a number of different whales communicating (though we couldn’t tell the exact number — suffice it to say “a lot”).
Just as we were turning the boat to head back to the bay, we were surprised when our final Humpback of the morning slapped his huge flukes on the surface of the water. He was sort of close to us…but we didn’t think his tail lob was directed at us. More likely, he was communicating something to another whale who was underwater nearby.

Ocean Sports Whale Fact of the Day: Though they look inflexible, a Humpback’s flukes (the wide part of his tail) contain no bones…just cartilage. When the whale is born, the sides of his flukes are curled up so he can slide more easily out of mom’s birth canal.