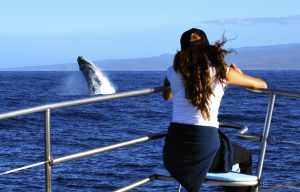 Breach off the Bow!

Aloha,
On Day 2 of our Exclusive Charters for the SAP technology group we found all sorts of interesting Humpback behaviors going on. Guests joining us on our morning Anaeho’omalu Bay Cruises got to see a lot of a Mom/Baby/Escort trio. Baby, of course, was on the surface quite a bit, and appeared to be leading the two adults around. At one point they all swam under Manu Iwa and over towards Seasmoke.
On our midday cruises, there were plenty of competitive pods to watch. Guests on Manu Iwa paralleled a pod of three who eventually worked out their differences as they broke apart and went their separate ways. Later, we spent time watching a Mom/Baby/Escort pod (most likely the same one we all saw earlier in the day). Meanwhile guests on Seasmoke got to watch breaches, pec slaps, double pec slaps, peduncle throws and even several tail lobs from 5 different competitive pods all within a couple of miles of the bay.
There were Humpbacks near Kawaihae too. Guests on the midday Alala cruise spent more than 30 minutes right next to a competitive pod of 5 whales. When this many whales are together, it can get pretty intense. While they were on the surface, we got to see peduncle throws, a spy hop, lots of tail lobbing and pec slapping, and watched these whales lunge on top of each other (and who knows what was going on underwater??!!). Later in the day we watched a Mom/Baby/Escort pod. Baby did a few breaches (which caught our eye from afar). When we arrived in the area, we got to watch him try to approach us a number of times, while Mom did a VERY good job of keeping him away.

Ocean Sports Whale Fact of the Day: Humpback whales can’t cry — they don’t have tear ducts (they don’t need them — their eyes are always bathed in salt water) but they do have glands on their outer corneas which secrete an oily substance that helps to protect their eyes from debris in the ocean.