Not EVERYONE was Resting! 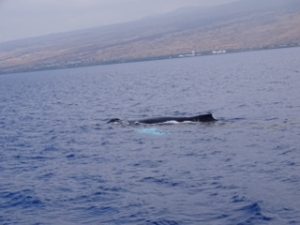 Aloha,
Tuesday’s Wake up with the Whales Cruise was really aptly named, as we began the cruise with a logging (a.k.a. “napping”) Mom and her very newly born calf (this little guy was very light colored and his dorsal fin was almost completely folded over). Later in the cruise we watched a pod of two whales getting active on the surface. We saw 3 breaches, several pectoral slaps and even some big peduncle throws from this pod before they worked out whatever it is they were trying to communicate with each other and settled down. The cruise ended with an encounter with a pod of Spinner Dolphins just outside the bay, and several sea turtles swimming around on the surface inside the bay.

Guests on our Snorkel & Whale Watch Adventure Cruise saw lots of whales right from the start, including a Mom/Baby pod, and other whales pec slapping and breaching (well, some of us saw the breaches — some of us weren’t looking in the right direction). We also got to hear the whales for ourselves when we dove underwater while snorkeling (no need for a hydrophone!).

Meanwhile, guests on our Signature Whale Watch on Alala were spotted by a big pod of Spinner Dolphins who made a bee-line towards the boat and played around us for awhile. They really weren’t all that energetic until a pod of two Humpbacks off at our 11:00 started breaching and head lunging. All that energy got the dolphins excited too, and they began to leap and spin all around us. After that, we found a logging Mom and calf (most likely a different pod than the one we saw on our Wake up with the Whales Cruise), and then saw a couple of other of other breaches further out to sea on our way back to the harbor.
Our Whales & Cocktails at Sunset Cruise began with a surprise — two big Humpbacks surfaced, spouted and sounded right off the bow. Later in the cruise we got to watch a pod of 3 sub-adults spouting, sounding and finally surfacing and doing a bit of pectoral slapping. We saw spouts and breaches throughout the cruise from whales a bit further away.

Ocean Sports Whale Fact of the Day: Humpback Whales don’t sleep as soundly as we do — if they did, researchers believe that they’d drown. Humans breathe in response to carbon dioxide build-up in our blood, but Humpbacks and other marine mammals have to keep part of their brain awake at all times so they remember to breathe. When a Humpback sleeps, she floats just under the surface of the ocean, and comes up to breathe every couple of minutes. We call this behavior “logging’ as the whale looks a lot like a floating log.