Last Cruises of the Year 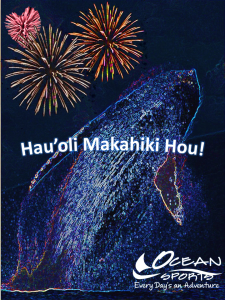 Guests on our last Mid-Morning Whale Watch Cruise of the year spent considerable time watching a pod of 4 whales cruising north along the Kohala coastline. Though they didn’t seem like they were in a huge hurry to get anywhere, they were swimming in a fairly predictable pattern, surfacing, spouting, and sounding pretty frequently and all in a row.
We stopped the boat to deploy the hydrophone, but no one around us was singing!
Guests on our Snorkel and Whale Watch Adventure Cruise got to see Humpbacks “coming and going”. On the way to the snorkel site we got to see a lone Humpback several times as he cruised north parallel to us. After snorkeling and lunch when we were on our way back to the bay we found a pod of two Humpbacks. These whales were breathing HARD…they were in some sort of competitive mode, on the surface a lot, and trumpeting with every spout. Captain Maika on the Seasmoke, and Captain Malinda (who was watching from the GBB) saw a third animal alongside these two competing whales…Maika thought it may have been a monk seal, and Malinda thought it was another whale…but whoever it was didn’t surface long enough for us to be able to solve the mystery for sure..
Wishing you a wonderful 2019!
Hau’oli Makahiki Hou!
Claire
Ocean Sports Whale Fact of the Day: When a Humpback spouts, he’s exhaling in a half of a second, 90% of the volume of air in his lungs. It’s enough air in one blow to fill up the interior of a stretch limousine. In case you’re curious, when an average size human adult exhales, he takes 3 times as long to exhale just 15% of the volume of air in his lungs — and an adult human exhalation wouldn’t even fill up a Smart Car — it’s only enough air to fill up a lunch bag.