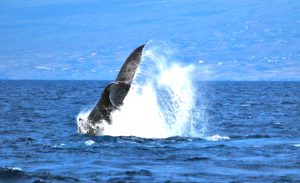 As is par for the course for us in January, we spent the weekend with the whales. We ran a lot of cruises…here are a few highlights.

Ocean Sports Whale Fact of the Day: Humpback Whales have massive tongues. An 80,000 pound Humpback has a two-ton tongue! If you had a similarly proportioned tongue, and you weighed 150 lbs, your tongue would weigh 7.5 lbs (in actuality yours weighs around 3.5 ounces).