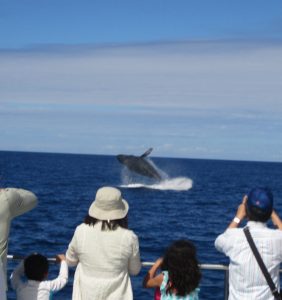 Patience definitely paid off for guests on Monday’s Wake up with the Whales Cruise. We started off with several sightings of whales, but they were all pretty far from us. So we decided to take a moment and deploy our hydrophone. Unfortunately, the singing we heard was pretty faint and far away too. After reeling in the microphone, we took off in search of other whales. We saw a pod of two Humpbacks sound in front of us, and while we were watching them dive, another whale surprised us by surfacing about 40 yards at our stern, so we turned the boat to put him at our 11:00.  After spouting, this whale did what our naturalist Greg described as a “weird twisty kind of a dive”…which is often a precursor to other surface activities. Sure enough, the next thing we saw was his huge pectoral flipper rising out of the water for a few slaps. As we continued watching, we saw some other twisty-kind of dives from him…behaviors we usually associate with whales interacting with other whales…but as far as we could tell, this whale was all by himself. And while all this was going on at our 11:00, another whale breached maybe 40 yards from us at our 4:00 (only one guest saw the breach but the rest of us saw the splash), so maybe our twisty whale WAS communicating something to other nearby (but hidden from us) Humpbacks.
Guests on the Mid-Morning Whale Watch Cruise got to see two different Mom/calf pods. One of these pods was clearly accompanied by an escort, and if the other pod had an escort around, he didn’t make his presence known to us. All of the adult whales we saw were pretty big for Humpbacks (so they must have been mature adults)…and even the calves seemed pretty large, so we’re guessing they were each several weeks old.
Mahalo
Claire
Ocean Sports Whale Fact of the Day:  In 2004, a company called Whale Power was founded by Dr. Frank Fish, Dr. Phil Watts and Stephen Dewar. The company builds fan blades shaped like a Humpback’s Pectoral Fins with tubercles on the leading edge. The ironically named Dr.Fish was inspired to develop the prototype after looking at a sculpture of a Humpback, and pondering how (or if) the bumps on the front of the whale’s fins would help him move efficiently through the water. He and his partners enlisted the help of the Navy and used their wind tunnel to discover that tubercles break up air (or water) flow…and now with the whale-inspired design, Whale Power’s turbine blades are not only more efficient than smooth blades, but they never stall out violently like smooth blades do, and thus don’t damage the turbine engines. The company’s motto… “A Million Years of Field Tests”. Want to learn more about this technology? Click HERE.