Humpback Song is a Real Treat 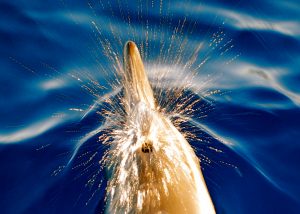 We didn’t operate any dedicated Whale Watch Cruises on Thursday, but we did take 160+ guests out on our 3 catamarans for an Exclusive Snorkel Cruise. Since each of the boats went to their “own” snorkel site, guests on each boat had different experiences. One thing we all had in common was finding ourselves surrounded by a pretty large school of active Spinner Dolphins on our way back to the harbor at the end of the cruise. We often find ourselves the object of interest as we pass by the Spinners, so they must have been really excited to have not one, not two, but three boats to investigate…lots of bow and stern wakes for them to ride! Guests on Manu Iwa also had a Humpback approach them…and guests on Seasmoke saw some spouts pretty far from the boat, but for those who could get their heads underwater while snorkeling, the real treat was listening to some loud and clear whale songs from “hidden” Humpbacks who must have been pretty close to the boat.
Have a great weekend — I’ll send out the next report on Monday.
Mahalo,
Claire
Ocean Sports Whale Fact of the Day: When we say we heard LOUD singing, just how loud do we mean? Well, Humpback whales have been recorded producing sounds at around 185 decibels. Because the decibel scales use different references for sounds underwater than through the air, that’s the equivalent of about 123 decibels for us on the surface…which is as loud as the amplified music at a rock concert when you’re standing directly in front of a tower of speakers.