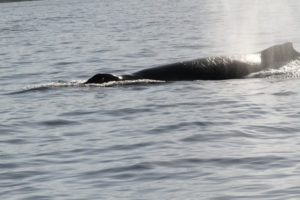 Aloha,
Guests on Wednesday’s Wake up with the Whales Cruise got to spend some quality time with a very young Humpback. Based on estimates of this whale’s size, Captain Ryan guessed he was a yearling (or maybe a two year old), and probably alone in Hawaii for the first time in his young life.
After the first time we saw this little whale, he took his time hanging out underwater before surfacing again fairly close to us. After that second sighting though, the whale seemed not to care that we were there, and he stayed near to the surface for the next 15 minutes. We got to see him spout several times, and we saw lots of shallow dives. Finally, he must have learned what he wanted to learn about us, because after surfacing and breathing deeply several times, he lifted his flukes, made a deep dive, and disappeared from view.
As we don’t have a scheduled Whale Watch Cruise on Thursday, I’ll be posting my next report recapping our weekend sightings on Monday.
Have a great weekend!
Mahalo,
Claire

Ocean Sports Whale Fact of the Day: Gestation period (pregnancy duration) for a humpback is 10 – 12 months, and after his birth, the calf stays with his mother for at least 10 months (perhaps one year). After that, the yearling is usually on his own, but on occasion researchers have observed a whale the size of a yearling in close association with a big female humpback…so it is possible that mom and her calf can stay together through the second winter of the calf’s life.