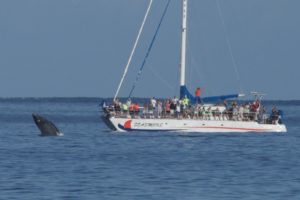 It felt like a celebration of Moms and their offspring all day on Tuesday. Guests joining us on our Wake Up with the Whales Cruise got to see 5 different Mom/Calf pods…and 3 of these pairs were also accompanied by escorts. Besides the frequent surfacings and spoutings of the calves, we got to watch one little guy burning off some energy by breaching 6 different times only about 60 yards from us. We also got to see a lot of big flukes-up dives from several of the escorts and a few of the moms. And…all of this activity occurred offshore of the Hilton Waikoloa Village. Mahalo to our good friends Rodger and Penny Berge who were standing on shore and managed to capture the fun on film (well…digital “film”, but you get the idea).When we deployed the hydrophone, the sounds we heard were loud and clear, but not so loud and clear that they could have been from the whales we saw sounding nearby.
We took guests out on an Exclusive Snorkel Adventure on Seasmoke which departed about an hour after our first trip got in. Leaving the bay, we encountered some of the same Mom/Calf pods we had seen on the earlier trip. We decided to head south to snorkel, and saw a couple more Mom/Calf pods on the way down to Kiholo Bay. As we arrived, we also saw another Mom/Calf duo very close to shore. On the way back from snorkeling, guess what we saw?? You got it…a couple more Mom/Calf pods including one in which baby was rolling around on Mom’s rostrum (head) at the surface.
Guests on our Alala Mid-Morning Whale Watch Cruise were greeted by a Mom and her calf right outside of the harbor. Baby made a few close approaches to our boat while we cheered him on. After watching them for awhile, we left to watch a lone adult Humpback. On the way back in at the end of the cruise we found our Mom and baby again, and baby was still curious about us. We got close up views of him again…and again, he got some pretty close up views of us too.
Mahalo,
Claire
Ocean Sports Whale Fact of the Day: There’s a time when a whale is still in its fetal stage that it’s covered in fur. By the time the calf is born, the fur has disappeared. Many researchers believe that this is another indication that whales have evolved from an animal with a common ancestor to a hippo. The idea that the stages of an animal’s fetal development reflect evolutionary development or “Ontogeny recapitulates Phylogeny” was first proposed by German Biologist Ernst Haeckel around 1900.