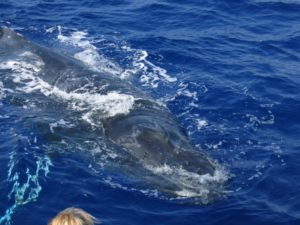 Humpback Surfaces Next to the Boat

There was a lot going on both above and below the water during our Thursday Wake Up with the Whales Cruise. We started seeing spouts as soon as we left the bay, but spent most of our time watching a pod of 3 Humpbacks who were traveling together. A couple of times, we got to see a bit more of their rostrums as they poked their heads above the surface. When we found a time to deploy the hydrophone, we heard some very loud singing…so there were definitely some Humpbacks close-by who we weren’t seeing too.
Guests on our Mid-Morning Whale Watch Cruise also got to hear some very loud and clear sounds through the hydrophone. While we were sitting and listening to the singing, a pod of two whales decided to surface just 30 feet from us (surprising us, to say the least). We watched those two swim and then disappear from sight, but since we didn’t really know where they were, we stayed in the same place and tried to get a feel for their dive cycles. Finally, we decided that those two were long gone, so Captain Will started up the boat engines…only to have our pair surface again right next to us…and after they disappeared, and we waited, and finally gave up…Captain Will started the boat engines again, only to have them surface next to us a third time! We also got to see some breaches/splashes from whales on the horizon.
We also ran an Exclusive Snorkel Adventure from Anaeho’omalu Bay in the afternoon. The surf was on the way up, so we headed south to try to find some good visibility for our guests. On the way to the snorkel spot we found a pod of active Spinner Dolphins who swung by the boat for some play time. After they left us, we saw what we thought was a Humpback calf spy-hopping (which was kind of odd as we’ve never seen a calf do that before). As we got closer, it looked to us like this little guy was learning how to breach. We watched him make several attempts…some more successful than others. Very cute stuff!
Have a great weekend…I’ll post our next report on Monday.
Mahalo,
Claire
Ocean Sports Whale Fact of the Day: Since Doctors Katy and Roger Payne and their associates first analyzed their recordings of the Humpback song in 1967, we’ve learned that not only does every singer in a population sing basically the same song, but that the song continually evolves. The Humpback song is very organized, and consists of notes, phrases, and themes (except for the Arabian Humpbacks who don’t include the themes). No one knows the true purpose for the song, but since every population of Humpbacks sings their own song, and since they mainly sing during mating season, the song may play a role in social organization.