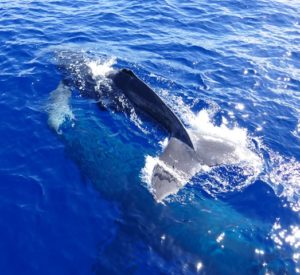 Whale Above – Whale Below. Image courtesy of Lynn Marie Lara

Friday’s Wake Up with the Whales Cruise began with us just missing a close-up view of a lone Humpback breaching 4 or 5 times. We had watched this whale sound, and after waiting around for awhile, we finally gave up on him and drove away…only to see the breaching behind us. But what happened next more than made up for that lost opportunity. We watched as a pair of whales swam right under us (we saw them below our stern), and surfaced maybe 15 feet from our 7:00. These two then headed out, so we paralleled them for awhile. The smaller of the two began pec slapping, and twisting around quite a bit at the surface. The larger of the two was also at the surface quite a bit, lying on his side and waving his big pectoral flippers. A couple of times we watched them lying belly to belly near the surface, and we also got some views of the smaller one at the surface with the bigger whale below. Were they mating? A bunch of us wanted to jump into the water to find out for sure, but since that’s not legal (or safe), we’ll only have to guess at what we were watching.
The whales were pretty quiet during Saturday’s Wake Up with the Whales Cruise. We listened to several other boat operators chatting via VHF radio, and no one was seeing much of anything along our part of the coastline. Guests aboard Seasmoke spotted two different lone adult Humpbacks. We paralleled one of them for most of our trip as he cruised the coast. On two different occasions this whale decided to surface close by — close enough that we got some real perspective on how big he actually was, and close enough that those spouts of his were really loud.
We saw spouts from a pair of big whales almost as soon as we left the harbor on Saturday’s Mid-Morning Whale Watch Cruise. These whales spouted 6 times each before lifting their flukes and diving. Since they had certainly re-oxygenated with those 6 breaths, and since they had lifted their flukes almost vertically before sounding, we figured they’d be underwater a long time. So we headed out in search of other whales, only to see our two on the surface again after 12 minutes…this time behind the boat. Later we spent some time with a Mom/Calf/Escort pod. Apparently it was rest time for Mom and her baby…Mom spent a long time on the surface, kind of balancing the baby on her big rostrum (head). When we got glimpses of the Escort, we could tell he was a big whale — and mom was fairly big too.
Sunday’s Wake Up with the Whales Cruise began with sightings of many whales, but all of them were pretty far away. After cruising around in a big circle, we finally ended up back closer to home where we saw lone adult whales on both sides of the boat about 250 yards away. Right after they dove, we found a Mom/Calf/Escort pod, and after watching them for a few minutes we saw some spouts from another Mom and calf. This pair was accompanied by a couple of other adult whales…so we may been witnessing the formation (or maybe the dissolution) of a competitive pod. They all cut right across our bow and ended up in very shallow water (we were in about 60 feet of water and they were even closer to shore). Why is that significant? See today’s Fact of the Day below…
Mahalo,
Claire
Ocean Sports Whale Fact of the Day: Dr.Alison Craig and her associates observed that female Humpbacks in Hawaii with calves in tow swim 75% faster when they’re being chased by males in deep water than when they’re being chased in shallow water. As water depth decreased so did the number of males following the mother, making females most likely to be found alone with their calves in the shallows. So why is this observation important? Dr. Craig suggests that it is unwanted male attention which causes the females and calves to increase their swimming speed, in turn requiring the mothers to supply their calves with more milk to compensate for the extra energy they’ve used. Since the females aren’t feeding in Hawaii, the researchers theorize that these female Humpbacks are actually seeking shallow water not to avoid predators…but to avoid the energetic consequences of male Humpback sexual harassment!