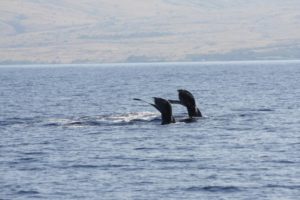 The trade winds came back over night, so we were met with some blustery conditions for Tuesday’s Wake Up with the Whales Cruise. Still, despite the wind, guests joining us saw quite a bit. We were accompanied by a Mom/calf pod for most of the trip, and they stayed close by to us. In between sightings of these two, we also saw a lot of splashing from breaching whales to our north. They were too far away for us to investigate…and even if we could have run out the several miles to see them, based on past experiences, they probably would have stopped breaching by the time we got to them anyway.
We operated two trips on Alala from Kawaihae Harbor. Guests on our Mid-Morning Whale Watch Cruise saw lots of spouting from pairs of whales with 10-20 minute bottom times. We saw a few sounding dives too, and plenty of dorsal fins. Our second cruise was a dedicated Educational Whale Watch with a group of keiki ranging from kindergarten age to third grade, some of their parents, and some teachers from The Learning Center. Again, we saw lots of pods of two adult Humpbacks, and several lone Humpbacks. All of them were surfacing, spouting a couple of times, and then diving. None of them appeared to be really traveling anywhere, so it did make us question what they were doing while they were underwater.
Mahalo,
Claire
Ocean Sports Whale Fact of the Day: Not all whaling activity occurred during the “golden age of whaling” at the beginning of the 19th century. Based on catch records corrected for illegal Soviet whaling, a total of more than 200,000 Humpback Whales were killed in the Southern Hemisphere from 1904 to 1980. Also, Illegal Soviet takes of 25,000 Humpback Whales in two seasons (1959/60 and 1960/61) precipitated a population crash and the closure of land processing stations in Australia and New Zealand.