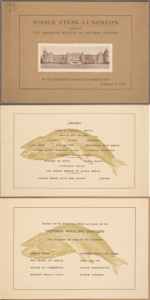 Hope you had a healthy, happy weekend. Here’s a recap of what we were up to.
Mahalo,
Claire
Ocean Sports Whale Fact of the Day:  On Saturday’s Cruise, I promised some guests that I’d post the in-depth story about the “Whale Meat Luncheon of February, 1918”. Back then, in an effort to stockpile more beef, mutton and pork to send to the American troops fighting the 1st World War, the US government decided to sponsor what they called, a “Conservation Luncheon” at the American Museum of National History in New York featuring Humpback Whale meat. Several dignitaries were invited (including Admiral Peary) to feast on the menu created by the Head Chef of Delmonico’s, and were quoted saying the meat tasted like pot roast or venison. During the luncheon, the museum’s “reliable sources” reported that if all of the 7 operational whaling stations on the Pacific Coast began processing whale for food (instead of for fertilizer), more than 20 million pounds of whale meat could be distributed to the American public during the summer months alone at a cost of 12.5 cents/pound (which is about $2.39/pound in 2020 dollars). The idea never really caught on with the American public though. If you’d like to see the menu, enlarge the image above.