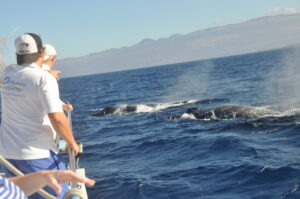 Humpbacks charge past the boat.

If you got a chance to read yesterday’s Whale Report, you may remember that we encountered a group of 4 adult whales who (oddly) seemed to be enjoying each other’s company and not competing at all.
Well, on Tuesday we witnessed almost the exact opposite behavior — the behavior we expect to see when a group of adult Humpbacks meet on the breeding grounds. We spent most of our Mid-Morning Whale Watch paralleling a pod of 3 Humpbacks who were chasing each other down the coast. When whales are involved in this kind of chase, we’re pretty sure they’re much more interested in each other than they ever are in us, but a couple of times all 3 of them surfaced fairly close by, surprising everyone on board. When we could tear our eyes away from the chase we saw a few spouts from other Humpbacks in the distance.
Mahalo,
Claire
Ocean Sports Whale Fact of the Day: When we watch a surface active competitive pod of whales, we assume it is comprised of one female either leading or being chased by a group of males. It often appears that every male is competing with every other male for access to the female. Recently researchers have observed that male humpbacks may actually form coalitions, working together to corral the female so that one may have easier access to her. While we weren’t certain if this is what we witnessed today, the interaction we saw made us think the energy expended on today’s chase must have been vitally important.