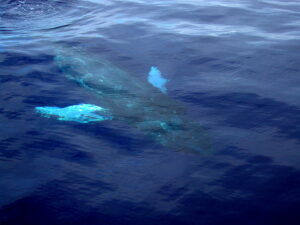 We ran just one Whale Watch Cruise over the weekend…our Saturday Morning Wake Up with the Whales Cruise. The cruise began with a dilemma…we were seeing so many spouts, we didn’t know which way to go! But we chose a course and headed towards a pod of Humpbacks, who turned out to be Mom, her little calf, and eventually an escort. Baby was up on the surface every minute or so (instead of the more typical 3 minute appearances for a calf) so we got lots of great views of him. Ironically, his frequent appearances made it seem like we had to wait forever to see Mom and that Escort, though they weren’t on particularly long dives. Later in the cruise we stopped to deploy our hydrophone, kind of hoping that while we sat in idle, listening to the loud, clear whale songs, a pair of Humpbacks we had been watching would surface nearby. They eventually surfaced, but they were actually much further away than we had anticipated. Throughout the course of the cruise, we saw evidence of somewhere around 15 different Humpbacks, and to be honest, we really didn’t have to travel far from Anaeho’omalu Bay to see all of these whales.
Mahalo,
Claire
Ocean Sports Whale Fact of the Day:  At birth, a Humpback whale calf weighs between 2,000 and 3,000 pounds which makes us think, “Poor Mom — that’s gotta hurt”!. But the calf actually weighs somewhere between just 3% and 4% of his Mom’s weight. Interestingly, at birth, human babies are proportionally larger, averaging 4%-5% of their Mom’s weight.