So Much Competition + Video You Have to See 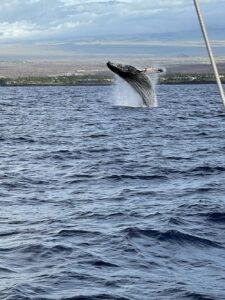 If you read our January 21st Whale Report, you may recall that I promised to tell you about our Wednesday Pau Hana Sunset Cruise. What a trip! The Cruise began with sightings of spouts here and there, and as we headed north, we found ourselves parallel to a very active whale who had been peduncle throwing and pec slapping. As we ALL watched, he surprised us with a total breach (see the photos provided to us by guests Jade Arnone and Adrianna Druffel, and the video clips courtesy of guest Brady Arnone and our own Captain Jason). This whale breached several more times…which might have caught the attention of the other nearby whales, because suddenly 4 of them were together, pec slapping, peduncle throwing, tail lobbing and head lunging. One of the 4 must have realized he was out-classed, because the next thing we knew, he was heading north. But the other whales weren’t done with each other (or us) yet, as 2 of them charged right towards our boat, with the third whale surfacing nearby. Captain Jason did some fancy evasive maneuvering, but those 2 kept surfacing and charging right at us three different times before they headed out to sea, and we had to turn the boat to head home.
Believe it or not, Thursday’s Mid-Morning Whale Watch Cruise was just as exciting. We started off the cruise seeing spouts in many directions, but we headed north into the wind and came across what we thought was a lone Humpback, peduncle throwing and tail lobbing repetitively. In the vicinity of that whale, there was another lone whale who was head lunging and spouting just one time, before diving and resurfacing to head lunge and spout just one time again. As we watched, these two joined and slapped their huge pectoral flippers on the surface of the water a bunch of times, before our head lunger took off. It turned out that our peduncle thrower wasn’t alone though. He and his buddy began heading north and encountered another pair of Humpbacks heading south, which spurred some more competitive pectoral slaps. Finally, our lone head lunger decided to surface just about 50 feet from idling boat, surprising us with a pretty loud spout before she took off again.
Mahalo,
Claire
Ocean Sports Whale Fact of the Day: Why do we love to see a Humpback wave his pectoral flipper in the air before slapping it on the surface of the water? Well, that pectoral flipper is one of the most distinguishing morphological (body) characteristics of the genus. Humpbacks have extremely long pectoral flippers averaging 1/3rd the length of their bodies (approx. 15 feet). The flipper is such a distinguishing feature that the genus name for the Humpback (Megaptera) actually describes it – the translation from Latin for Megaptera is “Big – Winged”.