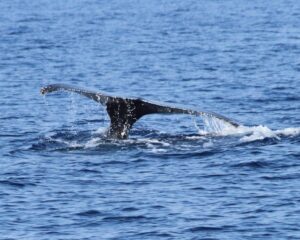 Aloha,
Thursday’s Wake Up with the Whales Cruise was an incredible trip. It started off kind of slow…we headed south out of the harbor, and when we hadn’t seen any whales for about 15 minutes, we stopped to lower our hydrophone. We heard quite a bit, so we knew there were whales close by.
Anyway, after listening for awhile, Captain Kino saw something — he wasn’t sure exactly what — further out to sea. It took around 10 minutes to get to our magic 100 yard mark, but when we did, we realized we were looking at a Mom, her calf, and her escort.
Once these 3 got a look at us, they seemed to be very interested, and they decided to approach us. We spent the rest of the trip getting mugged by this trio…they surfaced and looked at us, and then seemed to leave, only to turn around and surface right next to us again. They were very out of sync with their dive cycles, so we never quite knew who was going to surface next, and where exactly to look. At one point, baby and Mom got kind of excited. They were about 30 feet away from us when baby started tail lobbing, and attempting some peduncle throws (at least that’s what he thought he was attempting to do). We also watched him roll over onto his back and slap his pectoral flippers on the water. Meanwhile, Mom was sort of twisting around at the surface too. Oh…and most of the times we got to see the Escort surface and sound, he’d lift his flukes high, but turn a little to the left as he dove so we never got a complete view of the white patterns on those flukes.

Ocean Sports Whale Fact of the Day: One of the best ways whale watchers have to identify individual Humpbacks is by the unique markings on the ventral (underside) of their flukes (tails). Currently, the National Marine Mammal Laboratory based in Seattle maintains a data base containing more than 30,000 photos of the North Pacific Humpbacks flukes dating back to 1966, but other researchers, including those involved in the 3 season SPLASH (Structure of Populations, Levels of Abundance and Status of Humpbacks) project have also used these patterns to identify who’s who in the whale world and estimate population levels.