Final Whale Report of the Season 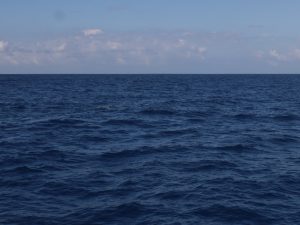 No Humpbacks to be seen!

A few guests wanted to try their luck searching for Humpbacks with us on Wednesday, so we departed Anaeho’omalu Bay at 8:00 AM on Seasmoke.

The weather was great, and we could see a long way in every direction (which boded well for sightings), but though everyone spent the entire cruise scanning all over the place, we didn’t see a single Humpback. When we deployed the hydrophone, we didn’t hear any either.

So does this mean that every Humpback who visited Hawaii this season has left? We doubt it — we actually saw 2 Humpbacks breaching offshore of Anaeho’omalu Bay on Tuesday. And if you’ve read these reports in previous years, you may remember me letting you know about surprise Humpback sightings from as late as the beginning of June.

While we won’t be operating any more dedicated Whale Watch Cruises until December 15th, it’s a safe bet that every time we’re out on the water, we’ll be keeping our eyes open for spouts and splashes. And of course, if we see anything, undoubtedly, I’ll be unable to resist the opportunity to share the news with you!

One more thing…I’d like to thank our hard-working Captains and crew for sharing their adventures this season, and of course I send a Mahalo Nui to all of you who read and commented on the posts. I’m already looking forward to next season!

Mahalo and a hui hou,

Ocean Sports Whale Fact of the Day: Though we didn’t get to hear the Humpbacks singing on our final Whale Watch Cruise today, the haunting song of the Humpback has actually travelled beyond our oceans. In 1977, NASA launched two Voyager space crafts. Aboard each was a golden record with a collection of sights, sounds and greetings from Earth in 54 different human languages. These records also include greetings from Humpback whales! And that was just the first time the whales’ song traveled beyond our planet…On Earth Day (4/22) in 2005, a private organization called Deep Space Network broadcast a live feed from a hydrophone off the coast of Maui of the Humpbacks singing. They used a five meter parabolic dish antenna and broadcast the sounds about 18 trillion miles into deep space. So far, we’ve yet to receive a response. Even more interesting…in 2012, NASA sent a couple of probes through the earth’s radiation belt and found that the radio waves produced within the Van Allen Belts sound an awful lot like the Humpback’s songs. Listen to the clip here and let us know if you agree.